A common relay technique used in communication to combat scintillation is to amplify-and-forward (AF) the desired signal. This simply means that a relay node is placed in between the transmitter and the receiver which amplifies the desired signal from the receiver and then forwards the amplified signal to the receiver. While this is a traditional technique in standard communication, it has only recently been studied for use in the field of FSO communication. Several groups have researched the effectiveness of optical amplify-and-forward (OAF) relaying and the results have shown this technique to be viable.

The major problems preventing FSO communication from becoming a more prominent form of communication include severe power loss due to weather conditions and link fading. In fact, links may experience fading due to inhomogeneities of the index of refraction in the optical beam also known as turbulence-induced fading or scintillation. On January 15, 2011, Mehdi Karimi and Masoumeh Nasiri-Kenari wrote a paper describing their relay-assisted (RA) OAF layout, how it was effective in combating scintillation, and how reliable it was in comparison to a multiple-transmitter (MT) system when subjected to weak-to-moderate turbulence. 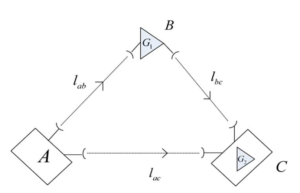 The RA OAF system designed by Karmi and Nasiri-Kenari can be seen above with the relay node at B being the actual place where OAF occurs. Node A is the transmitter and Node C is the receiver.  Node A transmits the signal to both B and C simultatneously.  Node B amplifies the signal received from Node A and forwards it to Node C.  The two signals were then compared along with the original transmitted signal for accuracy. They also compared these results with received signal from a MT system. It was shown in their paper that the RA OAF system was consistently more reliable than the MT system. Their research exhibits the viability of an AF system used in FSO communication to combat natural inhibitors such as turbulence and scintillation. [1]