Geostationary orbit, also known as geosynchronous equitorial orbit (GEO), is the region of space surrounding earth above 35,786 km. Satellites in this region positioned along the equator will orbit at the same relative speed to which the Earth rotates, so the satellites will appear stationary to an observer standing on the surface of the Earth. This is advantageous because a GEO satellite can constantly conduct surveillance of one particular region.  Other applications of GEO satellites include weather monitoring and communication. [1] [2] 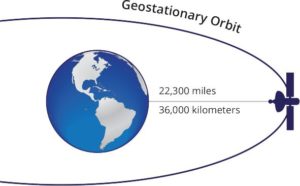 A depiction of a satellite in geostationary orbit