Engineering Test Satellite (ETS) is a program name given to certain satellites launched by JAXA (formerly NASDA). The ETS name is followed by the appropriate Roman numeral to indicate the ETS’s program iteration. The program is currently on-going in Japan and has been around since 1975 with the launch of ETS-I. It is currently on ETS-IX, which is scheduled to launch in 2022.

ETS-I was launched on September 9, 1975. Its objectives were to gather information on injecting satellites into orbit, tracking other satellites, communicating with ground control, and to provide information about the N-series launch vehicles. It remained in commission until April 28, 1982. [1]

ETS-II, Japan’s first GEO satellite, was launched on February 23, 1977. Its purpose was to gather data on geostationary satellite launch, satellite tracking and control in GEO, and to conduct communication experiments. [2] [3] One such experiment was downlink propagation of millimeter waves during heavy rain conditions. [4] ETS-II completed its service on December 10, 1990, and “left geostationary orbit.” [3]

ETS-III was launched on September 3, 1982. It was developed to provide the designers with information about engineering a high-power satellite that could observe the Earth. ETS-III had deployable solar panels and three-axis attitude control. ETS-III completed its service on March 8, 1985. [5]

ETS-IV was launched on February 11, 1981. Its purpose was to verify the power of a new launch vehicle, the N-II. It performed testing of its communications and broadcasting capabilities and completed its service on December 24, 1984, when its solar battery deteriorated. [6]

ETS-V was launched on August 27, 1987. Like the ETS-IV, it was designed to test the power of a new launch device, the H-I 3-stage launch vehicle. ETS-V created a foundation for future satellites in independent technology development, mobile communications, and three-axis bus systems. [7] It completed its service on March 31, 1989. [8]

ETS-VI was an experimental GEO satellite that launched on August 28, 1994 [9], but due to a malfunction in the apogee-engine, the satellite never reached GEO orbit and fell into a large elliptical orbit instead. This produced an intense variation in communication windows and availability for maneuver testing. [10] ETS-VI established a 1Mbps bi-directional optical link with the ground station and eventually carried out experiments in acquisition and tracking and mutual communications. The on-board laser received at 530 nm, transmitted at 830 nm, and had a power of 60W. [11] The ETS-VI was tested as part of the 1995 NASA GOLD (Ground-to-Orbit-Laser-Demonstration) program. The 1Mbps bi-directional data rate was achieved between the ETS-VI satellite and an optical ground station (OGS) at both a NICT OGS and NASA’s Deep Space Network at the Jet Propulsion Laboratory’s Table Mountain Facility. [12] The planned 10-year lifetime of the satellite was not achieved and the last maneuver for ETS-VI was preformed on June 4, 1996 at 8am. [13]

ETS-VII was launched on November 28, 1997. Its purpose was to test spatial robotics and rendezvous docking protocols. The satellite communicated with NASDA’s COMETS (COMmunications Engineering Test Satellite) in order to relay information to the ground station. ETS-VII encountered a few seconds of signal delay during downlinks and often had to compete with other communication satellites for bandwidth. [14] 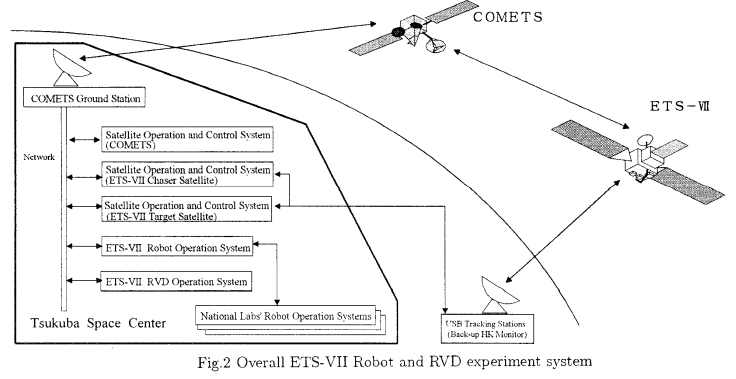 ETS-VII had two components: “Chaser” and “Target.” The chaser module aimed at the target module and performed docking procedures, both automatic and remote-controlled. The remote operations were done via teleoperative commands from the ground station using a data relay satellite. The docking procedure experiments with remote teleoperation were the first experiments of that type conducted in history. The satellite decayed from orbit and re-entered the atmosphere on November 13, 2015, presumably burned up or collected and destroyed. [15]

ETS-VIII was launched on December 18, 2006. Its purpose was to establish and promote functionality in mobile communications. [16] During the tsunami and earthquake in Japan in 2011, ETS-VIII proved to be a critical backbone for disaster relief support. [17] ETS-VIII ran out of fuel on December 18, 2016. JAXA discontinued the probe by throwing it out of its GEO orbit. [18]

ETS-9 is an upcoming JAXA test satellite scheduled for launch in 2021. Built by Mitsubishi Electric, it will carry the HICALI System. [19] Up until 2019, HICALI had only been tested in theory and on breadboards, but Munemasa et.al finally produced a engineering model, a design for the OGS, and an advanced demonstrable plan for HICALI integration with ETS-9 (Munemasa, et. al). ETS-9 is designed to facilitate communications for high-throughput satellites. To design a safe orbit for this satellite, researchers had to carefully map graveyard orbits of previous satellites and categorize them using photometry (Turberfield, et. al).