On December 25, 2021, the James Webb Space Telescope (JWST) was launched on an Ariane 5 rocket from Arianespace’s ELA-3 launch complex at Europe’s Spaceport located near Kourou, French Guiana.[1]  The project is headed by NASA with international support from such agencies as the ESA and the Canadian Space Agency (CSA). The Webb telescope is NASA’s largest and most powerful space science telescope ever constructed, but this feat comes with extreme engineering challenges, including its enormous size and cryogenic operating temperature.

The observatory is currently travelling to an orbit about one million miles away from Earth as it continues the process of commissioning in space—unfolding its mirrors, sunshield, and other
smaller systems; cooling down; aligning; and calibrating. Astronomers worldwide will then be able to conduct scientific observations to broaden our understanding of the universe. Webb will also complement the science achieved by other NASA missions.[2] 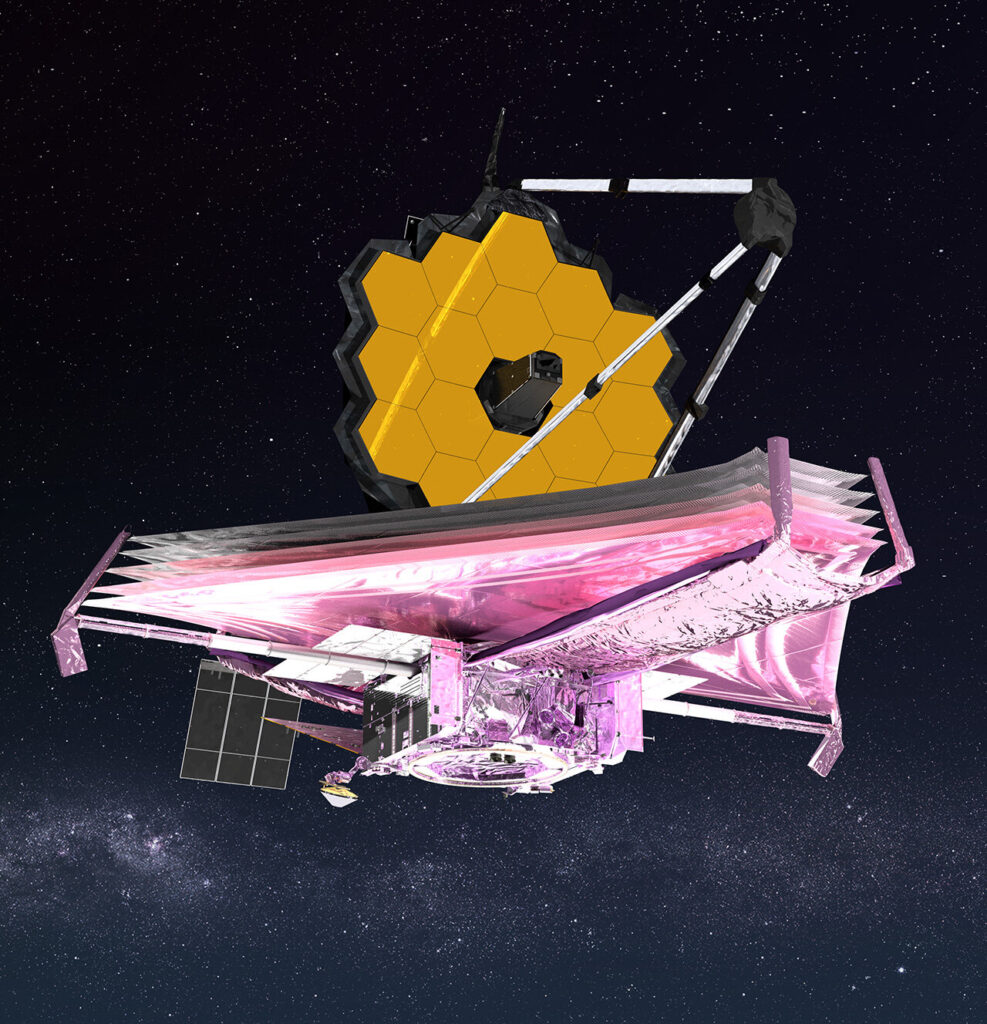 The JWST communication subsystem is the part of the spacecraft bus that provides 2-way communications to and from the observatory during certain ground testing activities and throughout the operational phase. S-band frequencies are used for command uplink, low-rate telemetry downlink, and ranging. Ka-band frequencies are used for high rate downlink (0.875, 1.75, and 3.5 Mbytes/s) of science data and telemetry. All communications are routed through NASA’s Deep Space Network, with 3 ground stations respectively located in Australia, Spain, and the USA.

JWST has a 0.6 m Ka-band High-Gain Antenna (HGA) as well as a 0.2 m S-band Medium-Gain Antenna (MGA). Both are mounted on a common articulated platform, generally referred to as the HGA platform. The HGA platform can be articulated to point at the earth for any orientation of the observatory. The broad beam pattern of the MGA ensures that 40 kbps real time S-band telemetry is available with any visible ground station. S- and Ka-band links can be operated simultaneously and support all communications for commissioning and normal operations.

Routine 2-way communications, including downlink of science data from the solid state recorder, can occur during science observations and during slews. As seen from Sun-Earth L2, the Ka-band downlink has a beam width about the same angular size as Earth. As such, the HGA pointing must be periodically adjusted to keep Earth centered. The HGA repointing maneuvers are expected to result in a small but measurable pointing disturbance, so they are planned not to occur during science integrations. The HGA must be moved every 10,000 s, which sets a limit on the maximum nominal duration of a science integration. There is an exception to this for certain observing modes requiring long uninterrupted integrations but where small gaps in the science data stream from a pointing disturbance is acceptable. Some observatory engineering activities can only take place during a real time communications contact and require the suspension of science observations. [3]