A cognitive diversity network (CDN) is an amalgamation of many different networking processes contributing to the operation of one network. “Cognitive diversity” is the difference in thinking, processing, and problem-solving styles among many individuals or groups. “Network” implies an interlinking of different technologies and methods, especially with regards to satellites and FSO. Therefore, “cognitive diversity network” means an interlinking of different technologies and methods in one network for satellite, RF, and FSO applications. 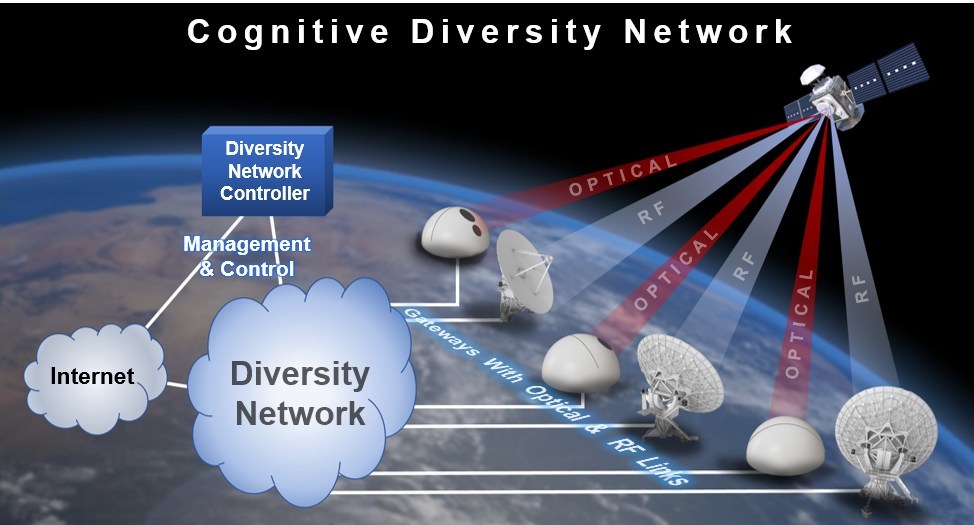 Example of a cognitive diversity network, including OGS and RF/FSO hybrid communications.

There are many sites that can route data traffic from satellites. As such, there must be a dynamic, real-time decision-making algorithm that determines how the traffic is routed. This is a current issue in building a cognitive diversity network for satellite networks. PathFinder Digital approaches this problem in their white paper to NASA by describing technologies developed by other companies. [1]

NASA Glenn Research Center proposed the usage of machine learning algorithms and artificial intelligence to reduce the strain on the legacy communication systems. The proposal will utilize a delay-tolerant network and will be a hybrid RF/FSO undertaking (Chelmins, et. al). Researchers at JAXA and Tokai University in Japan have studied the implementation of CDNs and network switching in optical ground systems (OGS) to account for atmospheric interference and turbulence (Tatsuya, et. al).

CDNs have several variables to take into account when networking. This includes the source of the data; the priority of the data, such as streaming or “store and forward”; the target geographic end destination; the available paths for data transmission and their associated speeds, with examples being satellite downlink, terrestrial fiber networks, and last-mile conversions; and the weather effects on uplink/downlink.

CDNs don’t have to be made by multiple companies. They can be made by one company specializing in all aspects of a communications network. For example, Laser Light‘s network uses A.I. and machine learning algorithms to analyze network conditions and dynamically manage how information is transmitted between nodes. Hughes Communications is designing a centralized software-defined networking (SDN) for optimizing the route that data streams should take. BridgeSat‘s proposed network “Star Beam” will make real-time calculations that will automatically route data using the most efficient path. It will also consider real-time weather conditions.