Starlink is a LEO satellite constellation being developed by the company SpaceX. The goal of Starlink is to deliver high-speed broadband internet using FSO technology to locations where access has been unreliable, expensive, or completely unavailable.

Starlink is currently the largest satellite constellation in space and is constantly growing. SpaceX wants the constellation to provide complete global coverage at low altitude which would require over 30,000 satellites of which 12,000 have already been approved by the FCC. Starlink filings in October 2019 with the International Telecommunication Union (ITU) suggests Starlink could grow to 42,000 satellites. To put this in perspective there are roughly 2,000 total satellites in Earth’s orbit and only 9,000 have been launched historically.

After the first launch of 60 satellites, viewers noticed a bright string of lights in the sky. This has raised concerns with many astronomers and other researchers about how much a constellation of this size would affect visibility or images taken from highly sensitive telescopes. SpaceX is currently taking measures to reduce the brightness of its satellites including using an experimental black coating to reduce reflectivity. [1] [2] [3] 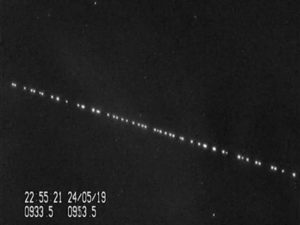