The Japanese Data Relay System is a data relay satellite that is scheduled for launch at the end of 2019 on the HICALI satellite. It was developed in 2015 and went through several years of critical and maintenance design phases. It is anticipated to operate for 10 years. The satellite is designed to have an in-orbit FSO link to other satellites in LEO and a Ka-band RF feeder link to its home ground station. Telescopes located at NICT headquarters in Koganei, Japan will be used as optical ground stations (OGSs). [1]

Adding this relay satellite is an effective measure for increasing downlink availability in JAXA’s satellite grid. The downlink time window for most LEO satellites is 10 minutes to 1 hour. With a data relay satellite like JDRS, that time window can be expanded up to 9 hours, increasing the amount of data that can be downlinked from the original LEO satellite. With a time window increase also comes an effective position increase, allowing the LEO spacecraft to be out of range of its ground station but still able to communicate with the relay, and thus still able to communicate by proxy to its ground station. This greater site diversity has the potential advantage of not only reducing the complexity, weight and cost of equipment carried by JDRS, but also mitigating the attenuation effect of clouds on optical signals by routing traffic around it. 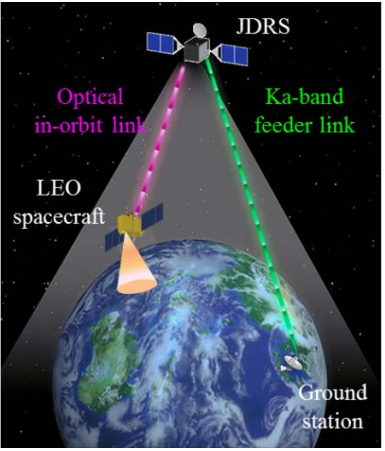 JDRS includes a Gbps-class laser communication system, further maximizing data throughput. Since the satellite is small and has low SWaP, multiple lasercom systems can be linked to it, allowing several LEO spacecrafts to use the relay at the same time. The laser operates at 1550nm, contains built-in error correction code, and can operate for GEO and LEO satellites. The total effective data rate is 2.5Gbps for a return link (downlink) and 60Mbps for a forward link (uplink). The designers of JDRS have planned to include WDM capability after the satellite has obtained orbit. [1]