Founded in 2007 and located in Tussenhausen, Germany, H3 Aerospace GmbH & Co. KG is a conglomerate of 11 different companies, including H3 HATS and Grob Aircraft SE. They mainly deal in the acquisition, manufacture, rental/ sale of aircraft, management/sale of all kinds of holdings in corporations and partnerships, securities and other assets in their own name and for their own account. The company does not conduct business within the meaning of the KWG or in accordance with Section 34c of the Commercial Code. [1]

H3 High Altitude and Technology Services (HATS) develops and tests aircraft, including the G520, for telecommunication purposes. They have the ability to equip different aircraft systems with different sensors or systems, which can be operated worldwide. They also define and certify Supplement Type Certificates (STC) for specific systems of potential customers. The GROB aircraft company with their certificates for developing, producing, maintaining or repairing aircraft systems supports H3 HATS for these STC services. [2]

The H3 Grob Aircraft company develops aircraft for commercial sale, training, and use by the other companies in the H3 Aerospace Group. Their products include the G 120TP, the G 520NG, as well as other systems for customized training. The G 120TP is mainly developed for flight training members of the military. The G 520NG is one of the world’s largest fully composite manned and unmanned aircraft, providing an ideal system platform for UAV/OPV (Optionally Piloted Vehicle) applications. The flexible payload-bay concept of the G 520 can accommodate multiple mission systems for both civilian and military applications and operations with a minimum of integration and modification lead time. Based on its proven airframe and systems reliability, the G 520 mitigates development risks for future UAV and/or system developments. [3]

The compartment layout of the G 520NG Aircraft

H3 HATS and Mynaric have launched a joint demonstration campaign to showcase laser communication capabilities for high-altitude long endurance aircraft using industrialized OCTs (Optical Communication Terminals). The initial flight onboard one of H3 HATS’ aircraft demonstrated key performance criteria of Mynaric’s HAWK product, currently in pre-series production. This marks the world’s first successful demonstration of an industrialized OCT for airborne applications. Initial flights used two of Mynaric’s HAWK products for airborne laser communication to demonstrate air-to-ground links: one on the ground and one mounted in the fuselage payload bay of a G520NG aircraft. After being cleared by all relevant regulatory aviation authorities, the first flights of the campaign demonstrated stable bidirectional laser links with 10 Gbps speed between the aircraft and the terminal on the ground over various flight patterns.

The flight campaign uses a G520NG aircraft suited for manned or unmanned missions at high altitudes of up to 50,000 ft and for long periods of time. The addition of the HAWK optical communications terminal to the aircraft extends its capabilities with secure and undetectable high-speed communication particularly relevant for intelligence, surveillance, and reconnaissance (ISR), broadband provisioning and other missions from high altitudes. The HAWK OCT is designed for secure real-time broadband communication within a wide array of airborne applications and small size, weight and power (SWaP) requirements. The product is currently in pre-series production at Mynaric’s production facility that was inaugurated in June 2021. This new HAWK OCT is currently included in flight campaigns with customers and partners in Europe and the United States. [4] 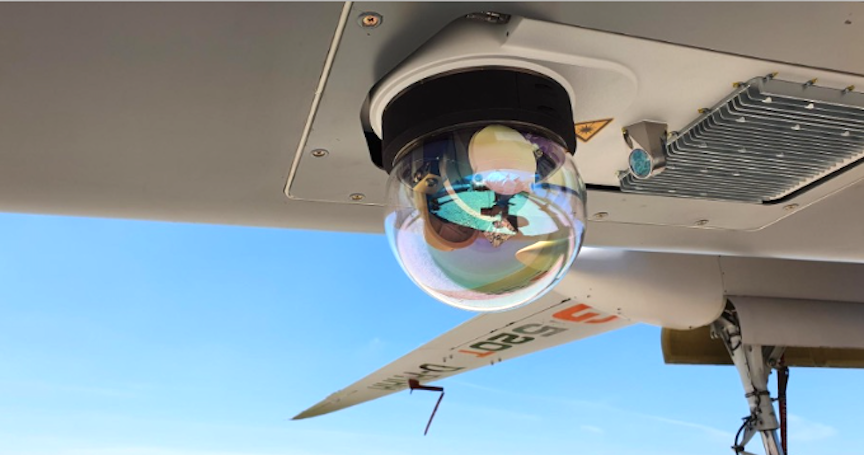