The Global Positioning System (GPS) is a MEO satellite constellation approximately 20,000 km above the surface of the Earth. The US government originally developed GPS for military purposes but now anyone with the proper hardware can access the broadcasted radio signals from the constellation. At least 4 GPS satellites are broadcasting receivable signals containing information about their individual positions and current time to any particular location on the planet.

It is possible to determine the position of any point on a plane using a process called trilateration. If at any particular time the given distances are known between the starting point and three unique reference points, one could draw a circle around each reference point with the known distances as the radii for each circle. The unique intersection of the three circles would be the same location as the starting point as depicted in the following diagram. 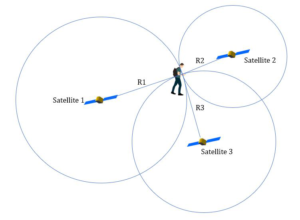